This engine is a K-27 by Bachmann. It is the largest engine in their 1/20.3 Spectrum line. Now out of production it can be found readily in the secondary market. There is a lot comment on what Bmann did and didn’t do right on this. I think it is one of their best offerings.

The model comes in a huge box with the tender and engine in their own styro-foam packing. Here is how it looks on arrival.

There are several different versions of the engine with different accessories. Mine came with the snowplow but it and the doghouse are available separately. 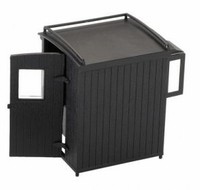 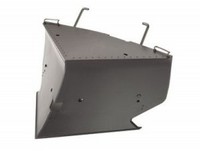 Mine was an unlettered green boiler version similar to this one.

Like #34 this is mostly a paint and electronics conversion. I will be painting it in the company colors (mainline sage green) and installing an Airwire decoder with Phoenix sound system. 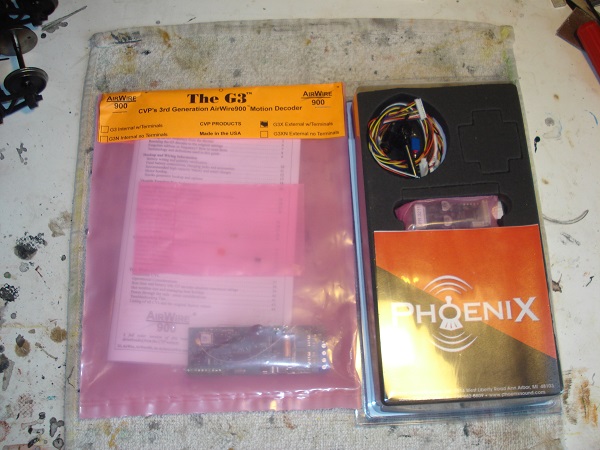 I bought NiMH battery packs when they were cheap so I am staying with them. The same battery packs can be used in all of my engines. They are larger and heavier then the common LiON 14.8 volt packs by quite a bit. Maybe as they wear out I will swap over. 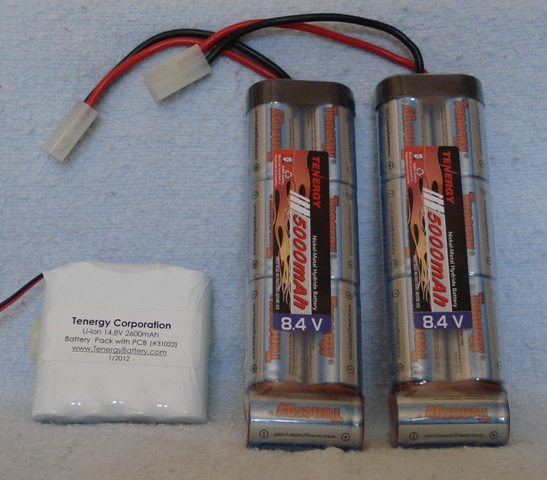 First I removed all of the existing wiring and circuit boards including the chuff switch in the cylinders. I also eliminated the weights in the tender. The electronics are installed in the tender in my normal configuration. Decoder at the rear as far from the motor as I can get it. Sound board in the front to reduce any concentration of heat. The speaker is in the center in the factory supplied mounts. It sits under the battery shelf. All other wiring is cabled on the same level and includes an on/off switch reachable from under the tender, volume toggle also reachable from under the tender and an inline fuse holder. The lighting run to the front head/marker lamps, cab and rear light. The chuff is triggered by a reed switch supplied by Phoenix. 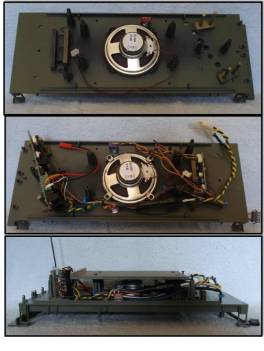 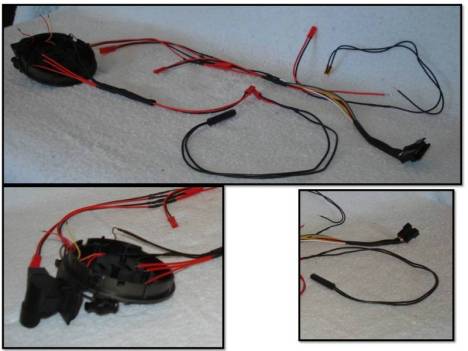 I like to use these two pin male female connectors to allow easy disassembly of the engine. They cost almost nothing and go a long ways to simplifying maintenance.

You can see in the figures above that I mount the boards on edge. A line of holes is drilled underneath the each one. This lets air flow around and over the boards cooling them.

With the electronics done I need to paint the engine. Since it is a Bmann product almost every joint is either snap together or screws. Not a lot of glue in these products. The boiler needed to be painted black. It and the chassis needed weathering but the cab has to be painted and lettered. The windows are glued in at the corners and can be carefully removed using a sharp pointed Exacto knife.

I washed the parts then taped the interior as it was already the right color. Painting the windows was bit more work. They are injection molded in clear plastic with the frames and mullions painted black. I carefully taped the glass panes using scotch tape and then sprayed both sides with sage green. Unlike the logging engines I did not paint the roof salmon red but did it in sage green as well. 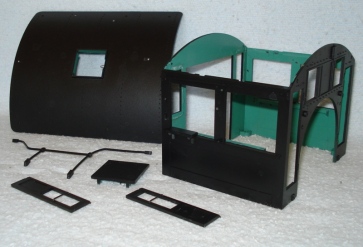 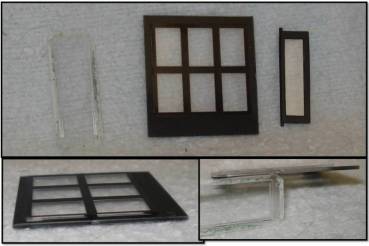 Decals in black were applied just below the cabs side windows. I reassembled the engine with the cab interior still taped and did some very light weathering of road grime and oil smoke. Now onto the tender.

I removed the coal load and built a deck for the oil tank. I left holes under the walk way for air flow. I am not happy with this so at some point I am going to build a better oil tank. To get the batteries in and out I had to remove all of the supporting material under the coal load. It came out easily with a pair of dikes and razor blade. 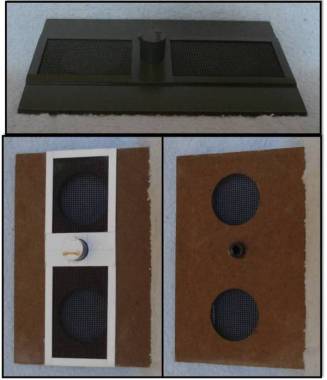 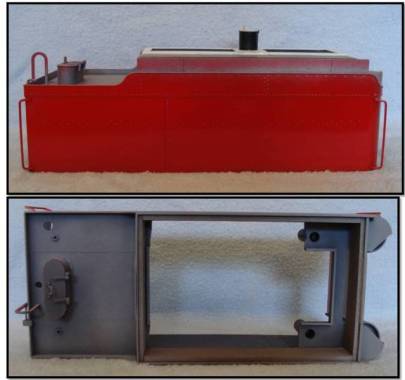 The tender was painted in the same manner as the passenger cars. It was primed white then done in bright red. Chart tape was used to mask the first stripe and then gray applied. A second line of chart tape was applied and the final coat of sage green was sprayed on. Decals printed on Testor’s decal paper were applied and clear coating of Treehouse Gloss sealed them in.

The trucks were painted and weathered then the entire thing was assembled and given the same light weathering as the engine. 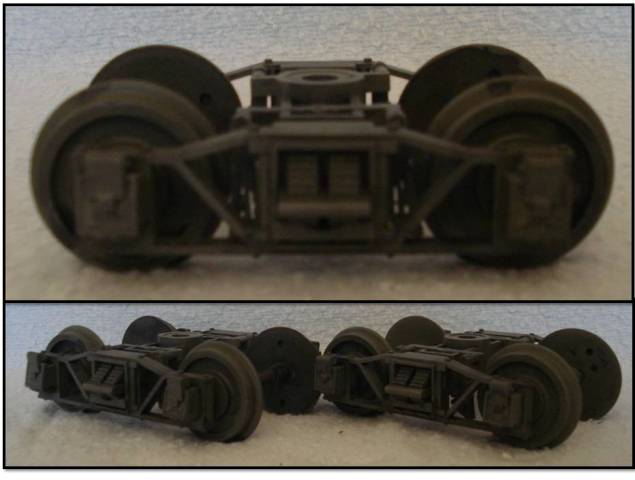 To finish I used Treehouse matte finish. It looks and smells just like Dullcoat but costs 1/4 the price. 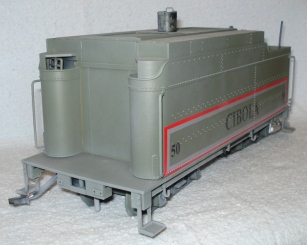 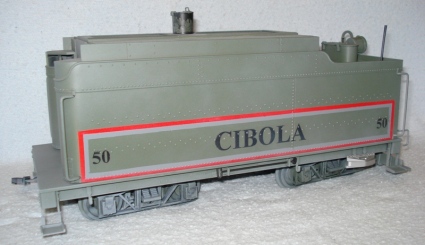 I had bought a crew from Railroad Avenue but was not real happy with the paint job. It is sloppy and craft fair looking with a heavy coat of black wash. A repaint was needed.With that done I reinstalled the windows and secured the crew in their seats. 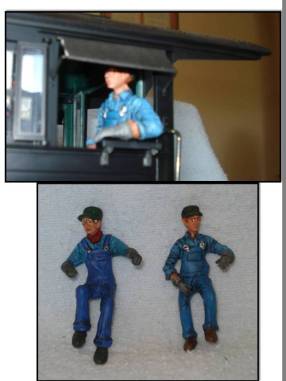 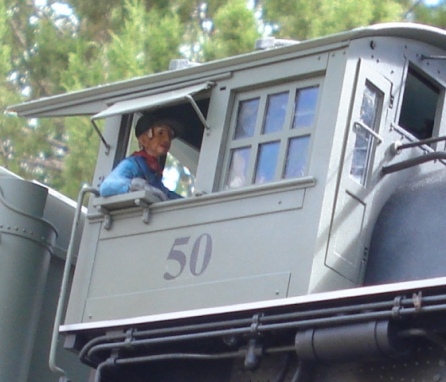 Unfortunately with the window shades you cannot see their faces to well but I know they are there. Time for #50 to hit the rails.

I originally built this engine to pull my passenger train but after I acquired #51 I decided to let them change jobs. The passenger drag is heavy and cumbersome so the Accucraft is better suited for it. #51 now pulls the varnish while #50 handles mainline freight.