Engine #37 is based on a Bachmann 2-8-0 Consolidation. I will be installing an Airwire G-2 board, Phoenix P-8 sound board and giving it a new paint job and details. This is the first engine that my buddy Bill Beck built a new gearbox and  motor for.

In the photo above you see that the engine still has the original vertical engine. I ran it on track power like that for the first year or so. When I made the decision to switch to RC/Batt this was the first engine I converted. The goal was to fit the sound and Airwire boards along with the batteries into the tender. I did not do a very good job of that and after only a few months I parked it on the shelf as I had completed #34 and was working on #50. Months went by and I moved on to other projects: rolling stock, track, structures etc… When the opportunity to have the new motor and gear box installed came along I dismantled #37 and sent it for the upgrade. I was very pleased with those results and immediately bribed…blackmailed…coerced (begged) Bill into doing #34 as well. It came back with the big Pittman motor with titanium gears and quickly became my favorite. Since it was already painted and lettered I put it straight to work on the layout. With it running I lost enthusiasm for #37, in part because I do not like redoing things but mostly because I do not see the need for two Connies in my roster. It set on the shelf for the next two years while I tried to sell it.

By the time I pulled it down in January of 2016 I had come to feel that working on it was a job, not fun. It had become frustration incarnate. That opinion did not change as I trudged through the process of painting and reinstalling the electronics. Now it is done and as usual I am happy with the results.

Below is a picture of the frame with the new motor and gear box. The motor now sits horizontal. This necessitated the removal of the rear weight from the boiler. The second picture shows the mounting block with an oil hole. This can be reached by removing the high pressure dome from the boiler. Also as part of the rebuild I removed the Bachmann couplers and replaced them with Accucraft. The height was also adjusted to fit the AMS cars. While the engine was apart I weathered the drivers and frame using flat black and red oxide spray paint.

The rest of the engine got its paint job as well. The boiler was sprayed with flat black, flat gray and red oxide. I use Krylon rattle can spray paint for this. It is cheap, tough and easy to do. The trick is not to paint the item but to create a fog of paint that drifts onto the surface. I wait for a warm day with temps above 60 F and no wind. A new can of paint works best but an older one which has a clean nozzle and is putting out a finely atomized spray will do the job. I stand back and hold the can about two feet from the surface and then spray in long even strokes. This creates a floating fast drying cloud of paint that mists onto the surface. I have no doubt that better results can be achieved with an airbrush but I do not want to spend days cleaning and changing colors.

With the boiler and frame painted it is time to get the engine together. The original motor hole is not even close to fitting so I had to hack out an opening that would let it roll up in to the boiler. I cut the sides with a razor saw and then broke out the piece with a pair of small dikes. It is still a tight squeeze getting it in but if I make the opening any wider I am afraid it would show after assembly. 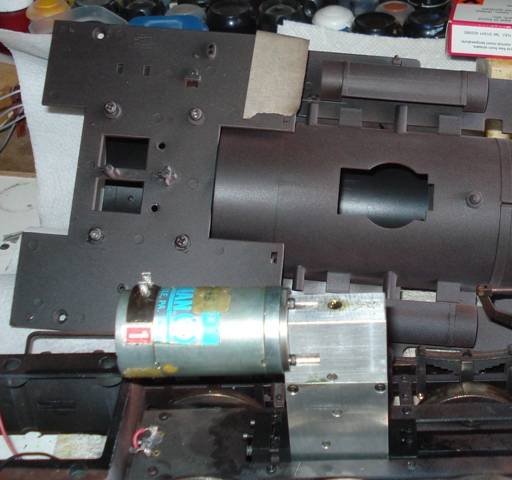 One of the nice things about the Bachmann Spectrum series is the boilers can be removed without having to dismantle the details or remove the cab. As with most Bachmann products there is very little glue used for assembly. Most items are pressed on, snap fit or screwed. This made it easy to take everything apart to get the painting done. Here is the engine just before putting it back together. 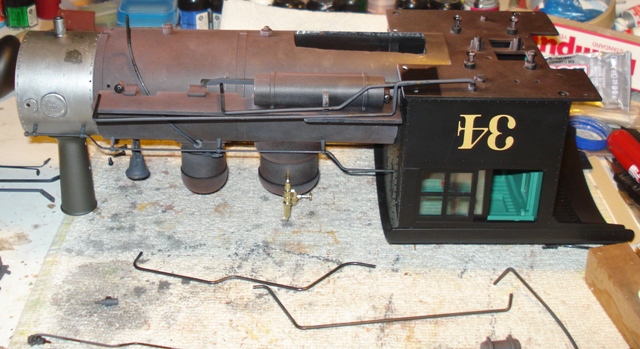 The electronics are pretty straight forward. Like mot battery runners I do not use the smoke unit. It is removed along with all the original wiring and boards. I know Bachmann put a lot of nice electronics into its engines but they are really designed for quick conversion to DCC. They are space hogs and a waste of voltage for us battery guys.

Both lamps get LEDs. I also added a LED in the cab that comes on with the forward light. For the chuff trigger I kept the original one installed on the forth driver axle. To get a two beat chuff I removed two of the four brass bars on opposite sides of the rotor. Normally I use read switches but since the connie has a mechanical switch built in I went with that.

To facilitate future access and disassembly I use two pin M/F connectors for the major circuits. A six pin connector makes the jump to the tender. This connector gives wire pairs for lights, chuff switch and engine power. 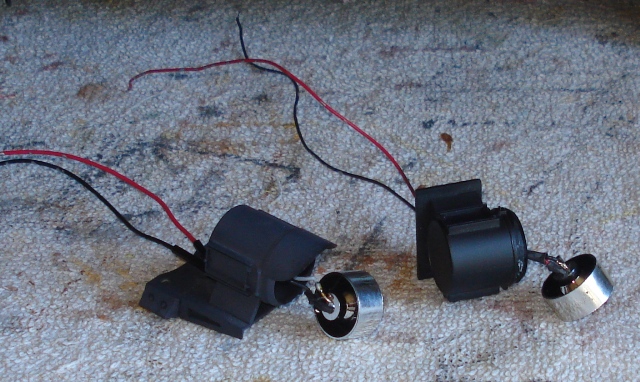 Wire connections are soldered on and run to the ash pan for attachment to the six pin connector. you can see in the second picture that wiring runs through the boiler. This is where those two pin connectors earn their keep. There is even one on the front to make removing the headlamp and front of the smoke box easy. 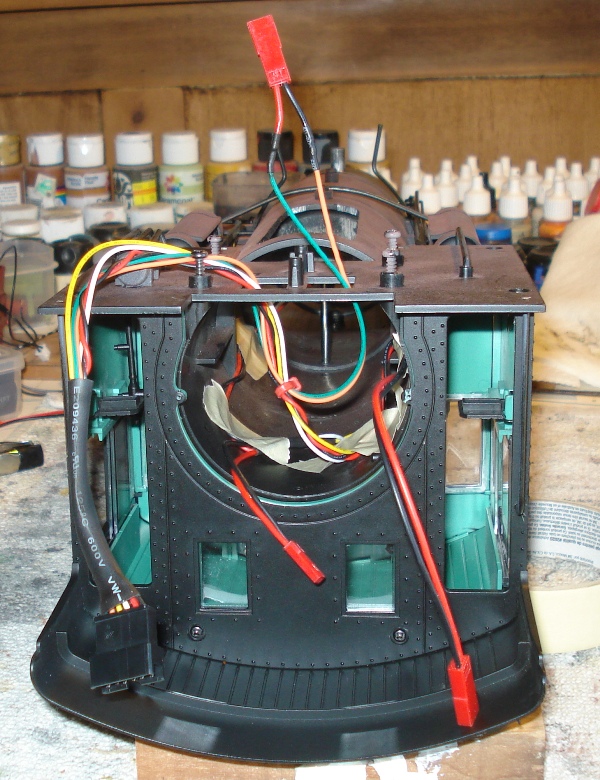 The engine all assembled. This is how it sat for a very long time until I decided to paint and letter it. When that day came I made the choice to cut the rear wall out of the cab so the interior was visible. I also decided to model the engine in the companies older pre-merger paint scheme. 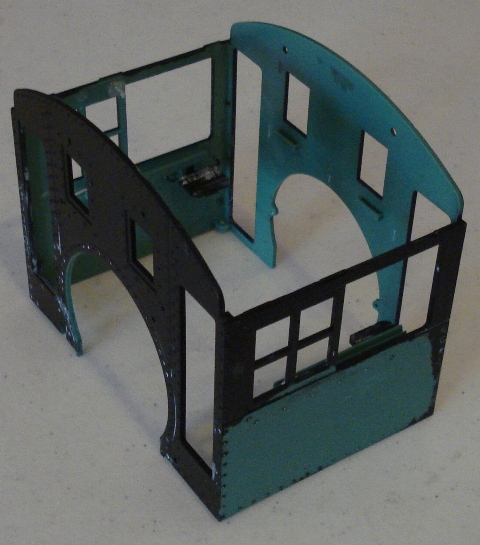 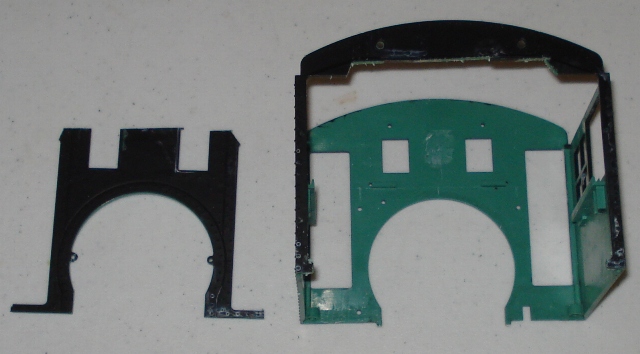 The crew are from Scale Humans and Brick Works. I cut the head off the engineer and glued it on the fireman looking right up the boiler. The engineer is the Brick Works mechanics body with a Railway Avenue head and arms from the Tamiya pit crew set. I gave him sleeves to protect his arms and a kerchief for his scrawny chicken neck.

Painted: the engineer is wearing a Cibola cap with the new company Logo. The fireman is hunched over to lean out the window of the cab. He fits the connie perfectly. 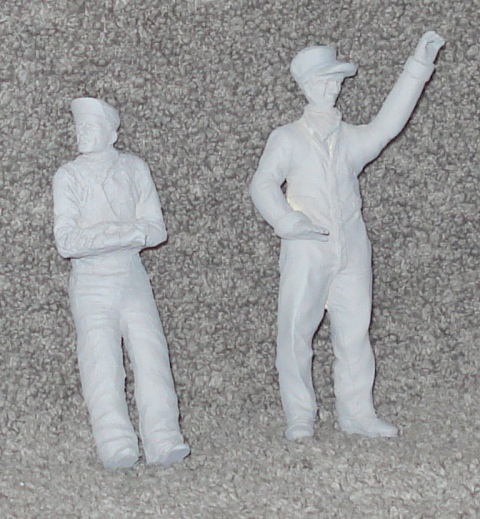 While I made decals for the other engines I went with painted lettering using vinyl letters on this one. The masking technique is simple and the results are very durable since they are paint and not decal film. I painted the background color first. In this case, flat black. The lettering is applied and pressed on firmly. The final color is next. I wait until the paint is dry to the touch with no sticky feeling before carefully removing the letters. I have found that leaving the letters until the paint is hard dry can result in the edges tearing or lifting off. Once the letters are done I weather and seal the cab. 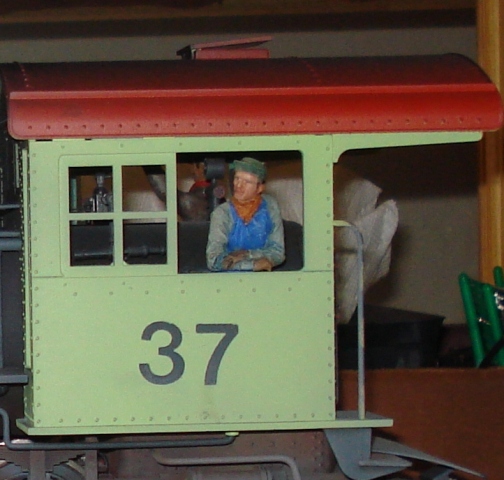 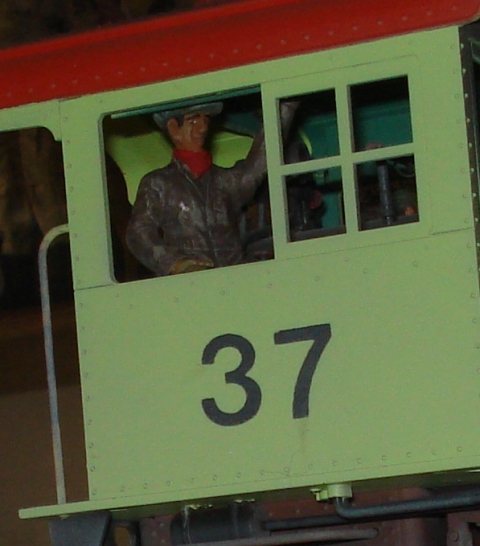 I was going to use an onion stack on this engine like the one on #34 but then I decided a Hunter Radley would look really good. Since #70 will be an oil burner I had one in the parts box from the Shay. It does not fit the 2-8-0 so I cut the bottom off the Connie’s straight stack and glued the new one on.

Engine is all done. Time to move on to the tender..in a few months.

So March turned into April and April into May. Having the engine done did nothing for my enthusiometer. To get things going I dismantled the tender and removed all evidence of my first effort. All pictures were destroyed and witnesses eliminated.

I prefer to mount my boards vertically per the manufacturers recommendation. They fit well like this and it is easy to do. Wood blocks support plastic posts because they are all non conductive and do not soak up heat. A half dozen holes below the boards let air in. The speaker is siliconed in place. On the right side is a toggle switch through the floor for power. On the left side is the volume switch for the sound system. An inline fuse on the positive side is close to the batteries. I twist the power wires to help suppress the EMR. To get enough height clearance I had to cut a whole in the battery deck for the top of the speaker magnet.

Wiring complete. Boards are now in place and the battery deck can be attached.

i cut the maximum amount of material out of the tender deck to allow for battery packs to be easily inserted and removed. I am not a fan of built in batteries unless there is absolutely no other choice.

Polystyrene sheet is fitted to support the cover. I decided to add a brakeman’s doghouse to this engine. It also needed rails for the wood load. These are made from brass strip. I put four supports on each side and then bent the ends, cutting them off where they met in the middle. The rails are super glued to the sides. Holes were drilled and heads from some HO rail spikes were added as rivets. Black primer gets everything to one neutral color and gives me a background for the lettering. 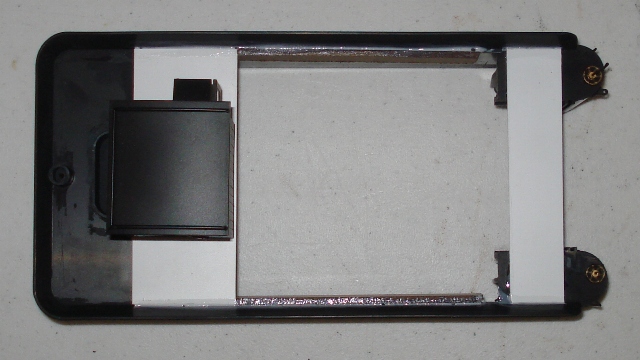 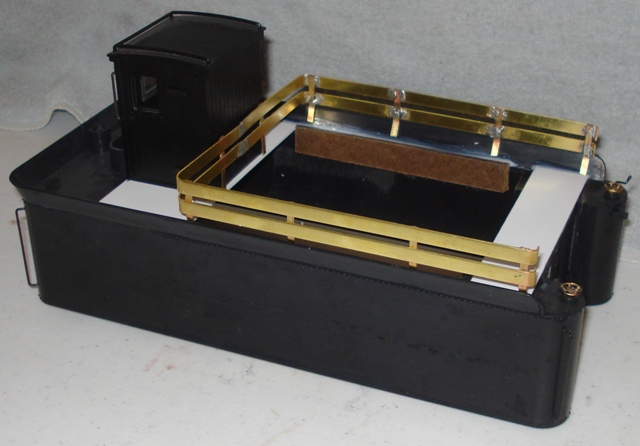 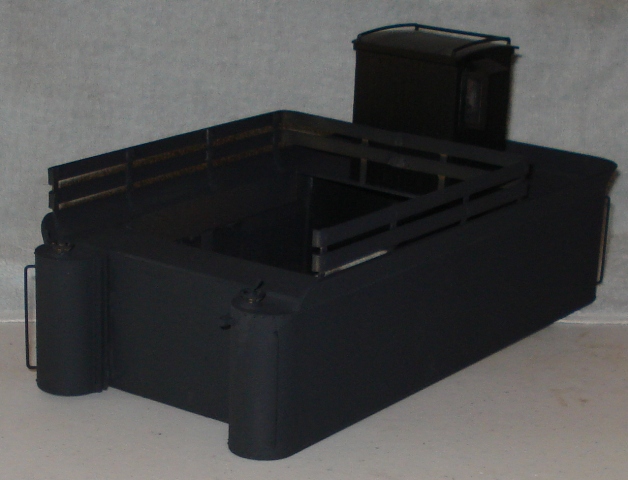 Here on the Cibola we either burn wood because it is cheap or oil because we don’t want to set the forest on fire. I decided to skip over coal. To make the wood load I cut limbs and sticks from juniper and peach trees on the property. These were then cut to length on the band saw. To make the split logs I used a box knife as a wedge and a tack hammer. An hour later I had a wood pile. 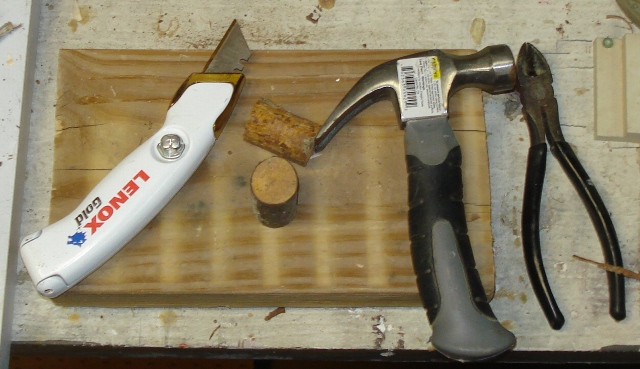 The cover is hardboard with a hole drilled in the middle for air circulation. It will be hidden under the wood load. I use TB3 in the center for its holding power and Elmer’s white glue on the outside since it dries clear. The center pieces are full length to bridge the opening. They will be hidden by the top layers. Cuts pieces go on the outside edges.

The first two layers are done in this manner. The third and final layers are made entirely of cut pieces and include both split and unsplit logs. A slight dusting of black spray paint helps tone down the raw wood natural color which otherwise seems to bright. 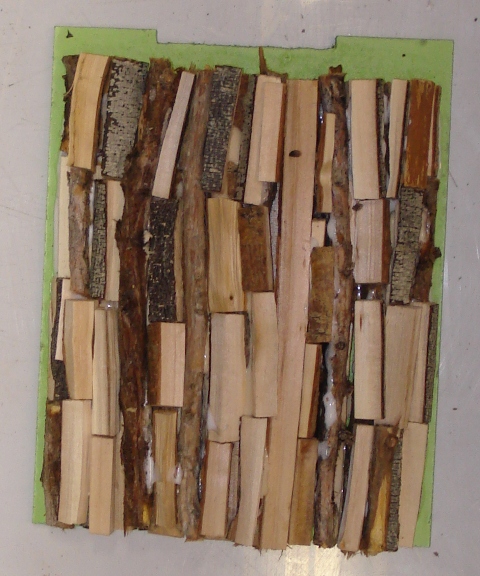 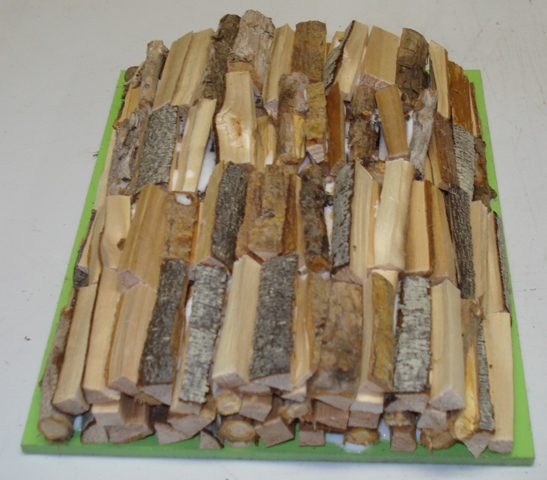 To finish the engine is programmed and bench tested. Jobs a good’un. #37 joins the roster.