Meat: From Farm to Market

The Cibola railroad exists primarily to serve its parent companies in the transport of timber and ore to processing plants in Albuquerque. By virtue of its extensive line it has developed a modestly profitable freight service which includes the transportation of livestock and meat products around Northern New Mexico and into Colorado via the D&RGW. The primary customer is Mitford’s Poultry Company and it’s wholly owned subsidiary Mitford Livestock Shipping. Mitford’s is one of several industries shipping on the Cibola who own their rolling stock. This includes livestock cars, reefers and a drovers caboose. Any other cars are supplied by the Cibola as needed. The following articles explain how I imagine this would work.

One of the more profitable operations of the D&RGW, C&S and RGS was the transport of livestock. They used one and two deck cars to move sheep and cattle from winter shelters in the south to summer pastures in Colorado. The stock pens at Chama are typical of the facilities used throughout the Rocky Mountain area. In the map below you can see the general layout of the pens and chutes. 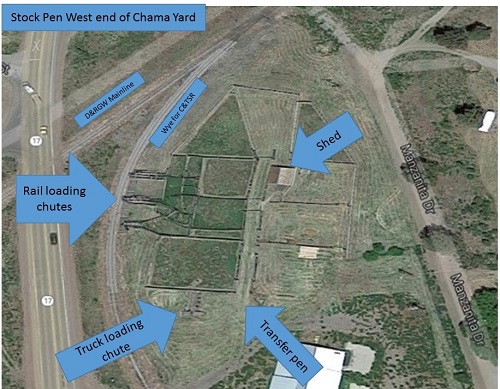 In function the facility would receive livestock by truck, train or herd. The transfer pen, which is the long wide section that runs north-south through the middle is the key to moving the animals quickly and efficiently in a controlled manner. Once in this area the herd could be moved into any of the holding pens for loading. Large gates on the south end of the transfer pen and north end of the trapezoid shaped pen would be opened to allow herds to be driven into or out of the facility by drovers. Herds coming or going from nearby pastures would use this method. In the late 1800s they may have been driven on cattle or sheep herds from as far south as Gallup. These animals were usually headed for slaughter in Denver. Feeder cattle and sheep were usually being loaded on or off train cars for transport to summer pastures. Later as trucks took over the vehicle chute on the south end would be used.

The facility as seen from the north side.

Some close up pictures of the gates and pen walls show the common construction and design of these features. The gates were of heavy construction and could be opened in either direction in most cases. This was a critical feature along the transfer pen as the gate became the fence wall that directed the animals into the different sections. Diagonal supports carried the weight and provided reinforcement on both sides of the gate. A sliding draw-bar held the gate closed. 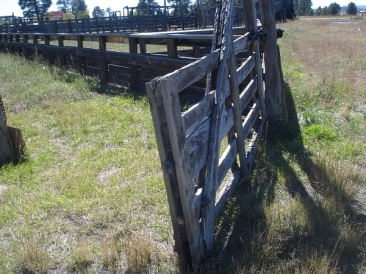 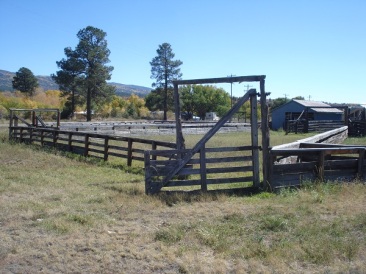 With thousands of lbs of animals pushing against the fence walls they too were of heavy construction. A rail laid horizontal across the top was commonly used to strengthen it against “climbers”. It also supplied drovers and handlers a place to sit or stand with relative safety while surveying the herd. The rails of the fence walls were always attached on the inside so that animals pushing against them placed the pressure against the fence posts. This prevented the fence rails from being pushed off the posts. Pens that shared a wall would have rails on both sides. 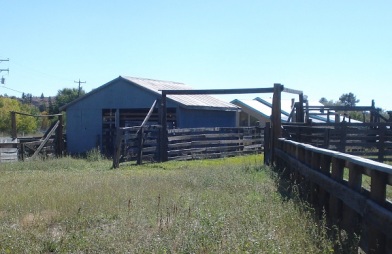 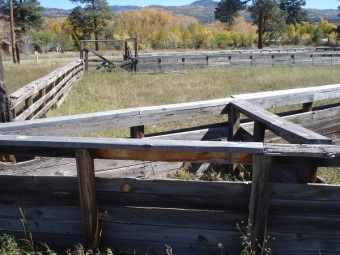 Pens did not always meet in neat right angles. To keep animals from being trapped in sharp corners where they might climb or be crushed a reinforced corner would be built as shown in the picture above.

In the center of the facility are two four-way gate systems.These were the main points where herds were directed into the various pens.Overhead cross beams provided support for the weight of the swinging gates. 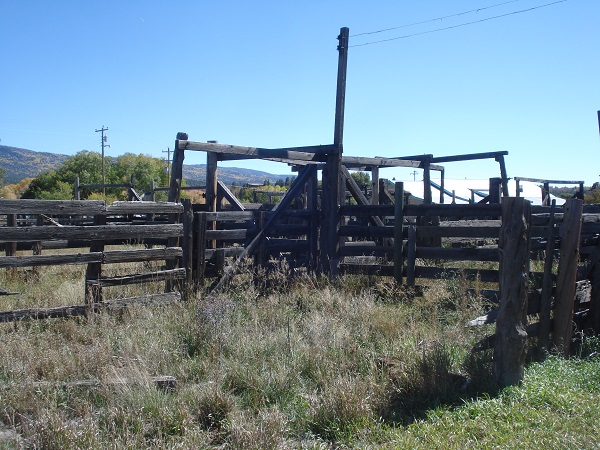 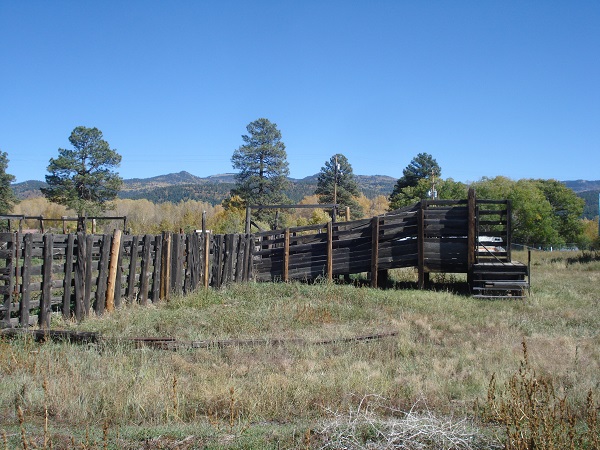 The most interesting part of the facility by far was the rail car loading dock. The spur is actually part of the wye used to turn the train or lines of cars. It consists of two double deck chutes and one single deck chute. The operation is similar to the truck chute except   each chute is built for only one type of car. Two double deck cars could be spotted opposite of the lower ramp. Extensions would be placed across the opening to each floor and slide out fence sections would close the gap on both sides. The lower ramp was straight up and in but the upper ramp came alongside and then shunted the animals over the lower ramp. This allowed the animals to be loaded on both decks through one door. The first chute shunts the animals from the left side as viewed from the track. The second chute shunts from the right. 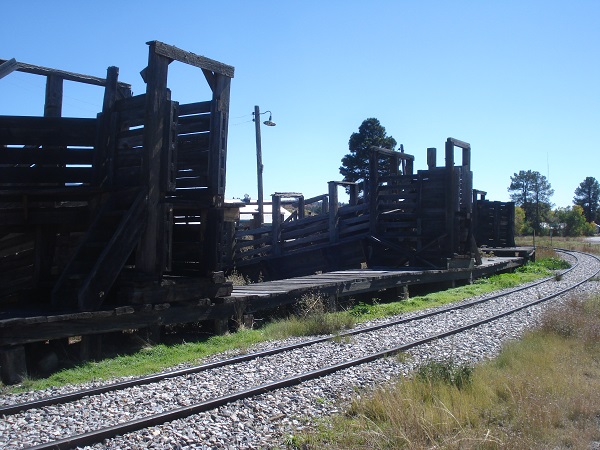 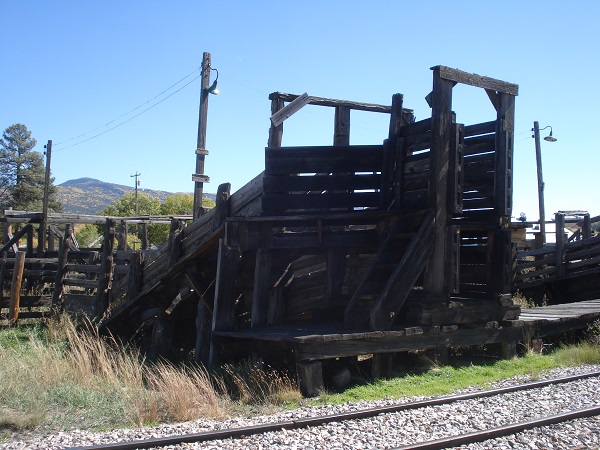 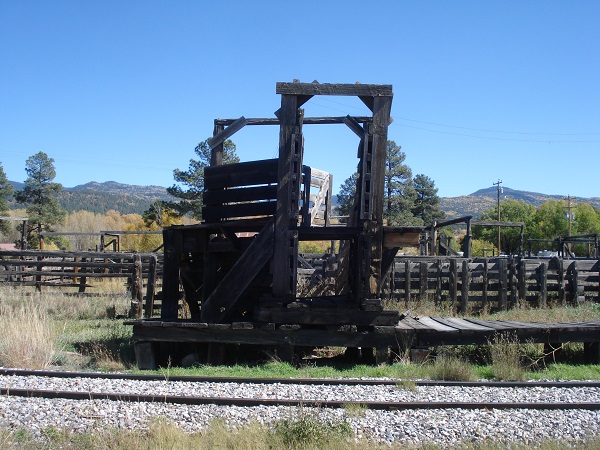 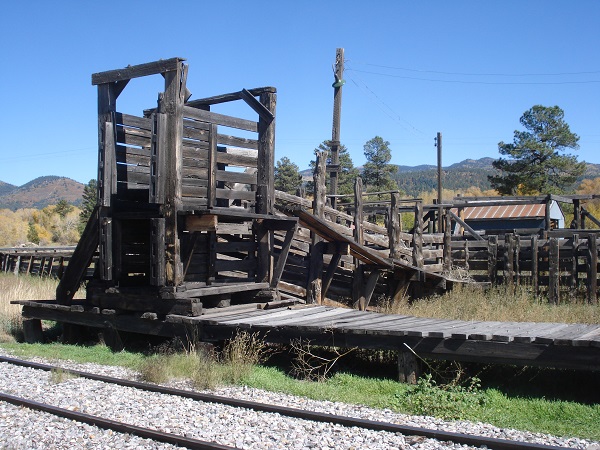 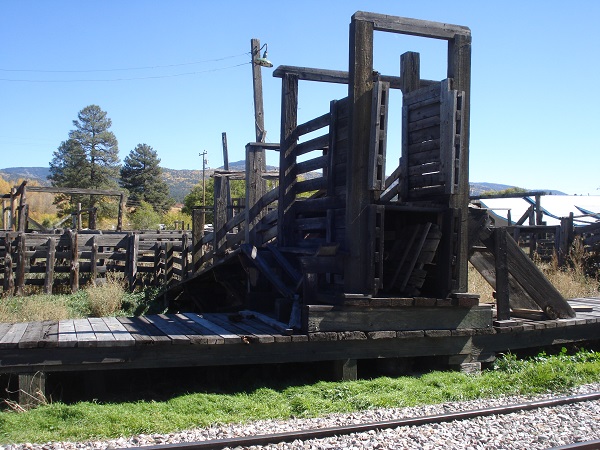 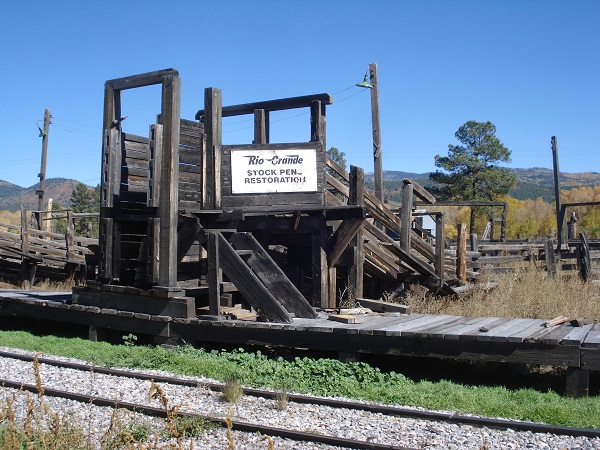 The third chute is a single deck at the end of the dock for horses or cattle. 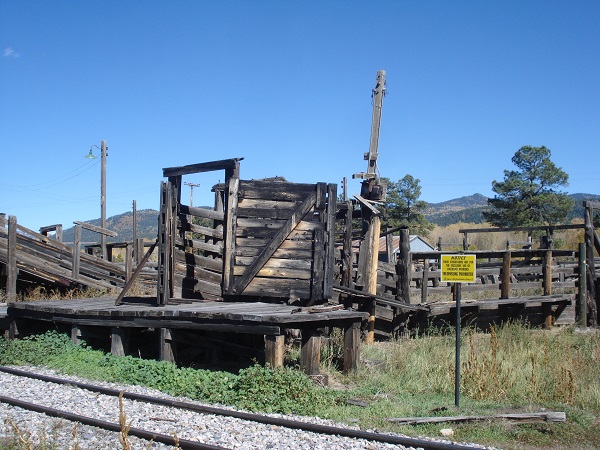 These types of pens and chutes were the typical design and could found in various combinations at facilities all over New Mexico and Colorado. Below a group of cattle are being loaded at a single chute pen in the 1950s while sheep are being loaded through a double ramp chute in the 1930s. 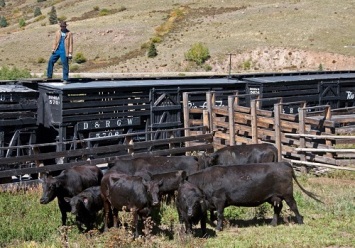 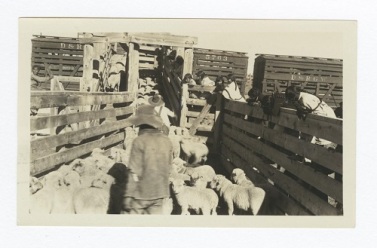 The pens I plan on building for the layout at Broken Wheel will feature two double ramp and one single ramp chute. A truck chute and herd gate will be on the end. You can see the basic design in the picture below. 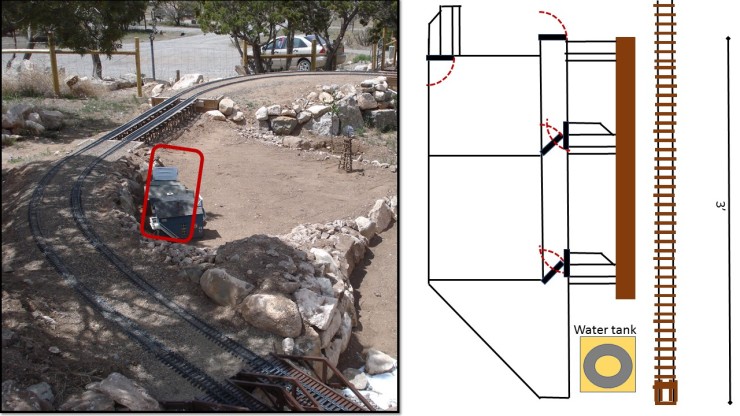 I will add a build log in structures section this spring when construction begins.